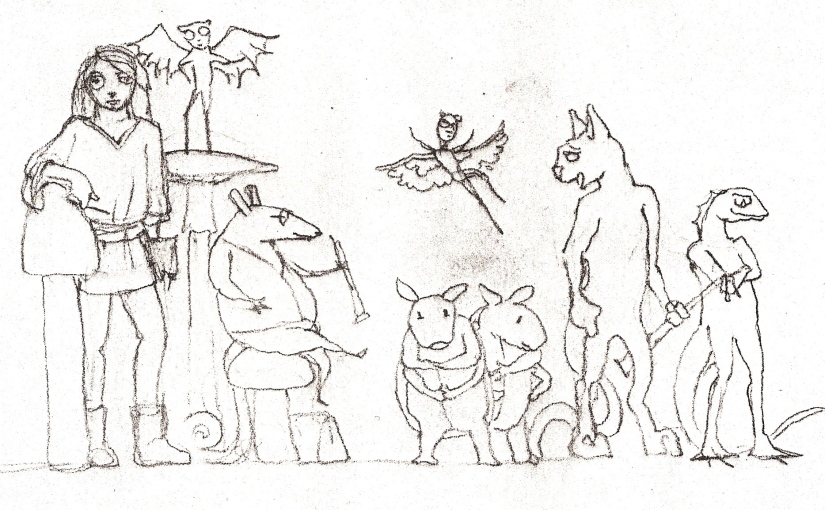 “Where are they?” Seeya said quietly.

“I don’t know,” Dante said, looking around. “This must be the right place.”

“I don’t know if this is the right place,” Ori said, “but the view is beautiful.”

“What now?” Seeya asked. “I thought there would be something here.”

“Well,” Greff said, “we might as well head down to the valley. We’re more likely to find food and water down there, and I doubt anyone is going to show up here.”

They looked at each other and came to agreement. Dante sneaked a peek at Addis who hadn’t said a word. He was looking down at the valley with a troubled expression, but didn’t argue. Dante was disappointed that they had come this far and no one had been there to meet them when they reached the summit. What if they never found the Khee? They hadn’t seen any more portals, so she wasn’t sure what they would do once they reached the lake.

Going down the mountain was much faster than going up, and by late afternoon they had reach the near edge of the lake. As they stood there, Addis reached into his bag and pulled out folding chairs. The group sat, wondering what to do next. Dante couldn’t sit still, so she got up and wandered down the shore of the lake a little.

“Don’t go too far,” Greff called after her. “We don’t know if we’re alone here. And if we’re not, the inhabitants could be dangerous.”

She had turned to smile at what she thought was Greff’s overly cautious attitude when she suddenly heard whoops of laughter, and was instantly surrounded by a pack of creatures laughing and shoving, and moving so quickly they all seemed like a blur. When they finally stopped Dante could see they were four lizard-like creatures, with long muscular limbs and big eyes full of laughter. Despite their sudden appearance they certainly didn’t seem dangerous. In fact, their laughter was so infectious, she found herself smiling.

“Who are you?” she asked, as Ori, Greff and Seeya approached, followed by Addis.

“We are the Wumpus,” the tallest one said with a deep, mocking bow, “at your service. My name is Pirrin. And who might you be?”

“I’m Dante,” she answered, and for some unexplained reason they all burst into hysterical laughter. She found herself laughing with them. Greff stepped up next to Dante and faced Pirrin.

“Oh, do listen to him!” another one of the Wumpus said, “Isn’t he just a sourpuss!”

He grabbed her wrist with one hand and flung his other arm in the direction of the lake; she was suddenly looking at solid ice. She gasped, but before she could ask a question she found herself being pulled across the ice at a furious pace. As she tried to keep her feet under her she could see the other Wumpus were “skating” with them, their legs gliding over the ice, their feet never leaving the surface. She could hear some shouts coming from the bank behind her and felt her hand beginning to slip – or was Pirrin letting go of her? She was suddenly scared of crashing into something at the speed they were going and shouted, “I can’t hold on much longer!”

“Can you swim?” one of the Wumpus next to them asked.

“Yes,” Dante replied, and in the next instant she was over her head in water. She came up gasping and coughing, with the Wumpus swimming around her.

“You see, this way you don’t have to worry about hanging on.”

“What happened?” Dante had quickly recovered, and was trying to tread water. She was still coughing and the land was now far behind them.

“Oh dear,” Pirrin replied, “well, that could be a problem for you, couldn’t it?” And they all swam off, leaping and diving in the water like dolphins, laughing loudly.

Dante looked around; she was now in the middle of the lake by herself. Trying to steady her breath, she began swimming back toward the shore. The water pulled at her legs, which were already tired from the walk down the mountain. She rolled to float on her back, and then began to backstroke. She knew it would be getting dark soon, and tried to keep down the panic that was starting to rise in her chest. She realized she wasn’t going to make it, and began to sink. Just before the water closed over her head she felt herself falling, and landed on the dry ground with a thump. Winded, she sat up. She was surrounded by a thick fog, just like the fog in the Brox hollow, and could hear the laughter of the Wumpus all around her.

She got up and began walking in a straight line. She bumped into one of the Wumpus, who quickly spun away from her. “Take me back to my friends,” she said.

Another voice chimed in. “Yes, and you’ve been doing so well, aren’t you having fun?”

“No,” Dante said. “You’ve pulled me across the ice, nearly drowned me, and then knocked the wind out of me. I’m not having fun.”

“Well, we must change that at once.” Dante was suddenly swung up off her feet moving at a fast pace. She could feel the movement of the Wumpus as it ran, carrying her. The others were running along shouting. They reached the shore and they were instantly out of the fog, the lake sparkling behind them. Pirrin dumped Dante on the shore next to Addis.

“Now, see, I’ve brought you back to your friends. Don’t be cross.”

Dante didn’t say anything, but went to stand next to Ori, who put his arm around her. Seeya darted over to where Pirrin was standing. Dante noticed he stayed just out of the Wumpus’ reach.

“Well,” he said silkily, “that was just amazing. How did you do that?”

And he flicked his hand. The lake disappeared and they were suddenly enveloped in fog.

“No, no, me!” shouted another one. The fog was immediately gone and the lake in front of them was solid ice.

Pirrin shoved himself to the front of the group.

“That’s nothing,” he shouted , and the lake was turned into a steaming mass.

Another Wumpus said, “I want to play!”

The steam disappeared and without warning rain begin pelting down on them. Seeya shrieked and Wumpus laughed uproariously.

Dante had completely forgotten about being upset. She looked slowly at the rest of her group, who stood on the bank with rain dripping off of them.

“Could it be….” Ori began, but Dante interrupted.

“Wow,” she said, “I wish I could do that at home. Swim in the morning, ice skate in the afternoon, and create a thunderstorm to get out of gym class.”

The Wumpus all smiled. “It’s nothing,” they chorused, laughing. Dante found she couldn’t stay mad at them – they all seemed to be having so much fun, and they seemed to want her to be having fun with them.

Addis had been moving closer to her, pulling an umbrella out of his bag. He now made a pretense of holding it over her as Seeya edged his way underneath.

“Dante, we’ve got to get out of here,” he whispered. “These Wumpus are dangerous.”

“Oh, Addis,” she answered, twirling our from under the umbrella into the rain, “I don’t want to go. I’m having fun!”

From under the umbrella Seeya said, “Dante, dear,” but he was interrupted by Pirrin.

“Yes, yes,” the others chorused.

“That would be wonderful!” Dante exclaimed with a laugh.

“But unfortunately impossible,” Addis said, eyeing her intently. Ori had moved closer and agreed with Addis, “Yes, Dante, we need to keep going.”

The Wumpus surrounded Greff, who stood resolutely, rain dripping from his back, and began dancing a circle around him.

“Look,” one shouted, “a rain dance!” The others all laughed.

She ran to join the circle, and danced with the Wumpus around Greff. They moved on to Addis, laughing at his cross look under his umbrella, and at Seeya trying to hover next to him so his hair wouldn’t get wet. Addis had his bag firmly in one hand, and held the umbrella in the other. His wouldn’t look at any of them, and as Dante watched him studying the ground, she suddenly didn’t think it was quite so funny. She could see the shocked expression on Ori’s face, and the disapproving glare of Greff. She stopped and turned to Pirrin.

“Well, all right, if you say so.” The Wumpus stopped dancing, and the rain stopped. Before them the lake sparkled in the sunlight. Dante stood with her hair dripping, looking at Addis. He very stiffly folded his umbrella, and placed it back in his bag. Seeya looked up cautiously, and Greff moved over to stand next to Ori, looking over Addis’ left shoulder. Looking at her friends, the group who had picked her to be their leader, Dante felt ashamed of herself.

“I’m sorry guys,” she said, “I was just having so much fun. They really do make me laugh. Can’t we just stay one night?”

“No,” Addis said, “we need to be going. If you’ll recall we’re trying to find someone.”

“Although,” Ori said quietly, “we could use a place to stay.”

The others looked at him in surprise, but he just gazed calmly at Pirrin. “That is, if we’re all welcome.”