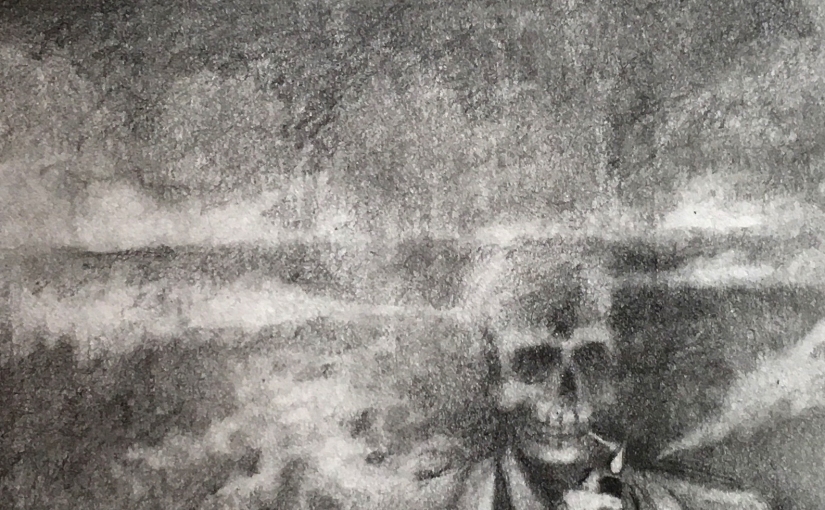 Several years ago Dan (you’ll know about Dan if you read the first blog – he’s the artist who supplied the drawing accompanying this blog), gave me a call and asked if I wanted to work on a project with him. And of course I did, so he told me what he had in mind.

He was thinking about a series of stop-motion vignettes about Death. Maybe Death in a bar, talking to the bartender. Bitching about his job, being a regular guy – but of course he’s Death so it really isn’t regular at all. I thought it sounded fun, so I began coming up with concepts. Death and teenage girls, Death and the Darwin Awards, Death has a tough day at the office. We went through several iterations, and the scripts below represent a few of my favorites.

NOTE: In initial drafts I often insert little jokes to myself that not many people will get – I find it fun but I’m guessing a lot of readers would find that annoying. The reference to the “E-Ticket ride” is one of those. Some will get it, some won’t – but you can always Google it if you’re interested.

NO BONES ABOUT IT

Scene: The bar. BARTENDER is behind the bar, DEATH is sitting at the bar, one hand curled around a drink, a cigarette in the other, smoke curling up. The door opens (or maybe we don’t see the door, maybe HUNCH just walks in from offstage) and HUNCH walks in (HUNCH is a very small skeleton with small bones and is slightly hunched over) and sits down next to DEATH.

BARTENDER: What’ll you have?

HUNCH: Milk. And make it a double.

DEATH looks at HUNCH and doesn’t say anything, looks at the BARTENDER. BARTENDER sets down milk.

HUNCH: (Takes a drink.) Good for the bones. You know, exercise, strength training, extra calcium. Don’t want to get too brittle.

BARTENDER reaches out to HUNCH, wait a beat, then pokes a vertebra (probably through stomach under rib cage?) Slight cracking sound and HUNCH compresses ever so slightly.

BARTENDER: Wow, that IS brittle. (Reaches out, pokes another vertebra. Slight cracking sound and HUNCH compresses just a little more.)

HUNCH: What the hell! Stop it! I’m not bubble wrap, damn it. (BARTENDER just laughs and starts to reach out again. HUNCH jumps up).

HUNCH: That’s it, I’m outta here. (HUNCH turns to leave. BARTENDER looks at DEATH. Without looking, DEATH reaches back and pokes HUNCH in the hip. Cracking sound and HUNCH goes down.)

BARTENDER: (Looking down over bar.) Nice.

HUNCH: (Pops back up on one leg.) I suppose you think that’s funny!

DEATH: No, not really.

(HUNCH hops out of the bar. Once offstage we hear a crack, then HUNCH speaks): DAMN!

BARTENDER and DEATH look at each other.

DEATH: Now THAT’S funny. (Holds up his drink, the BARTENDER picks up the milk and they click glasses. DEATH takes a sip, and the bartender tosses the glass of milk.)

DEATH walks into the bar, sits down and doesn’t say anything.

DEATH:  Yes. Please. (Silence while BARTENDER gets drink. Puts it in front of DEATH who curls one hand around it.)

DEATH:  Not really. Just got back from a job in Florida.

DEATH: No. Tourist. Wanted to get a photo of himself petting an alligator. It’s kind of nice when they make it easy.

BARTENDER: Oh. Right. (Pause while DEATH takes a drink. We hear a buzzing noise and DEATH pulls out his device and looks.)

DEATH: (Sighs.) It never ends. Back to Florida.

DEATH: (Stands.) No. This time I’m headed for the Tragic Kingdom.

DEATH: (Looks up.) Not when I visit. (Stands and puts device away.) I’ll be packing an 8.5 earthquake in my carry on.

DEATH: Count on it. (DEATH exits.)

(BARTENDER picks up DEATH’S glass, looks around, downs the rest of the drink. Wipes out glass with towel and puts glass back under bar.)

Set is completely empty except for DEATH, standing to the left of the scene, studying his fingernails.   A moment of silence.

We hear the sound of a dog barking, footsteps running, and panting.  SKELETON goes running through scene R to L with DOG chasing and barking (DOG is a skeleton dog with a perpetually wagging tail).  DEATH’S head turns to watch them goes by.  Goes back to studying his nails.

SKELETON:  Come back here with that!  I need that!  That’s my arm dammit!

(Stops in front of DEATH, panting.  DOG is nearby, growling, taunting with arm, still wagging.)

SKELETON: (Looks at DEATH.) It’s my neighbor’s dog.  Barks all night, craps in my yard, and keeps taking my extremities.  He buried my damn leg last week and I had to hop all over for days before I could find it.  Left his damn teeth marks in my fibula.  (Holds out his leg for DEATH to see.  DEATH looks leg up and down, goes back to nails.)

SKELETON:  You ever have this problem?

DEATH: (Looks at SKELETON, then at DOG.) Play dead.  (DOG drops into a pile of bones.  DEATH picks up arm bone and hands to SKELETON, who puts it back on.)

DEATH: (looks down.)  Good dog. (The tail slightly poking out from the pile of bones wags back and forth.)